Back when I first moved to Dubai, over 3yrs ago, I was lucky enough to see Eric Clapton in Abu Dhabi.

Back to the present day… I was there in a heartbeat and my weird “old guy crush” is still firmly in place!!

3yrs on and his raw talent has not diminished in the slightest. Does this man not age?! I am pleased that he doesn’t!!

One again, he took us through a wonderful selection of his music. He covered the hits, and bought us through what I suspect are a few of his favourite blues songs.

What I really like is that, once again, he came on and started on time. There was no fanfare, no build up, no lighting displays, no announcements. The lights went up and he and his band walked onto the stage. Once they were in place, they played for 2 hours straight. He didn’t babble between each song. He just said thank you in response to the thunderous applause he received. The only other time he spoke was to say the names of the band members he was highlighting.

And what a band they were. Absolutely fantastic… and that doesn’t even start to cover them!!! What fascinated me most was the keyboard player. No idea what his name is, but he looks about the same age as Clapton, but has that slightly addled and vacant look that you would suspect comes with a few too many mind altering substances over a great many years. Yet, once he puts his head down and starts to play, he is utterly ageless. I haven’t really ever seen anyone play like that. So fast and accurate. He absolutely blew the crowd away!

Conclusion: As long as Eric is playing, I will be queueing for tickets!! I just really hope he doesn’t play “Tears in Heaven” again. It is a really hard song for me to hear, and the tears were flowing. Ugh!!

Other highlights of the night was seeing his guitar from 1971 which was exhibited at the event.

The story is that he presented it to the owner of the Hard Rock Cafe in London when it first opened in 1971. The owner couldn’t play guitar, so Eric suggested putting it on the wall. That is how the collection began!

A piece of history right in front of us, and a night for my personal history books. I have never seen my Mum look as happy, young and vibrant as when she was listening to one of her all time favourite musicians play! It melted my heart! 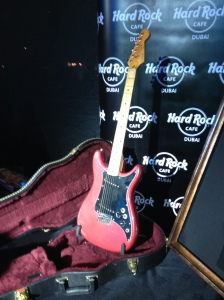