This weekend was probably my favourite weekend of the year, after my birthday of course!  Why… because it was TASTE OF DUBAI!!!  Such a fabulous concept and we are pleased they bought it here.  I have also been to Taste of Christmas and Taste of London.  A weekend dedicated to food!  Genius!  It’s the one guaranteed weekend of the year that I will be in Dubai, without fail!!

This marked my 3rd year, and I am looking forward to the next already!  I was pleased to see that this year was even bigger than last year!  The only thing that was missing, but I may have just not seen it, was a lot of the cooking equipment stands.  I loved those.  We need those back again next year, please!

Anyway, not only do some of the best restaurants in Dubai show their dishes here, but a bunch of celebrity chefs turned up too!  Apparently on the Friday Nicole Scherzinger turned up at the BA VIP Lounge which caused a lot of excitement!  I am sad that I missed her as am a big fan of hers (and her reported fiance!) but at the same time pleased because that lady is far too beautiful and has much too perfect body to meet her at a weekend of over indulgence!!

Our day started really well as we got there just in time to watch the FABulous Chef Jenny Morris’ cooking demo in the main theatre.  Not only does this woman cook the most yummy looking, smelling and tasting food, but she is an absolute gem!  One of those people who you know you want to be friends with because you can imagine sitting in the garden having a nice wee cocktail and laughing well past sunset.  She just has the most infectious laugh and such a lovely way of telling stories.  And then there is the food!  Who knew buffalo mozzarella and cumin coated steak would taste so good together?!  I will be hunting down that recipe and trying it out asap!!!

After her demo, she was signing books and meeting with people for photographs.  I didn’t want to bother her by catching her when she was just walking around, so I bought her book (which I wanted for the recipe that she just cooked!), and queued to have a chat!  It was great to catch up with this vibrant woman.

We had a bit of an amble around after that, because we had an hour or so to kill before we started to queue for Chefs School with the wonderful and unique Chef Reza Mahammad.  We walked around the main area where all the food stands were, and around the little random crafty section at the back of the area.  I have to say, I have been lucky enough to eat at most of the featured restaurants in the 3yrs I have been living here, so there wasn’t much that made me say “oooohhhhhhh” and be distraught if I didn’t have them.  I am however sad that I missed out on the Steak and Chips with a posh name, at St. Tropez.  It was highly recommended but by the time we had got to them, they had run out.  Boo.

I happily settled on a steak, egg and hash dish from the Fairmont on the Palm.  It was the perfect one to try too, and on the back of just that one dish, Mummy and I are planning on heading over for their breakfasty brunch before she leaves!  It was that good!  So, head on down on Fridays from 10.30 to 3pm, and make sure that you’re hungry!!  I wonder if they do it on a Saturday, actually?  Must google.  That will be the perfect day-after-brunch venue!!!!

While queueing for Reza’s class, we were lucky enough to catch the last half of Siba Mtongana’s class.  Naturally, I jumped at the chance of meeting her.  I love her show.  She has a beautiful face that just radiates health, happiness and kindness, but also the prettiest voice which I find very soothing.  Oh, and she makes super yummy food too!!  I am sad we didn’t get to see more of her, but really pleased that I got to meet her and have my photograph taken with her. 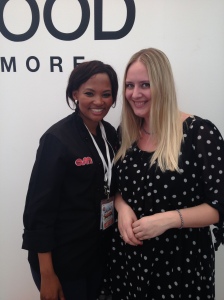 My thinking on the cooking lesson with Reza is that it would not only be hugely informative, as I am not a pro with Indian cooking, but it was bound to be super good fun too.  Reza is a natural comic genius!  And I was right…. we cooked a yummy looking prawn coconut milk curry with coconut rice.   Sadly I couldn’t try any because I am allergic to coconut, and Mum couldn’t try any because she is allergic to prawns!!  We just didn’t care though.  It was a great experiment and it was entertaining as heck because Reza was on form!!

After the class, and after giving our dishes to randoms and friends, we again queued to meet with Reza.  The same as with Jenny, although meeting and hanging out with them last year and emails or tweets since, I didn’t want to intrude on the little down time they have.  Also, the same as with Jenny, I wanted the book anyway because a couple of really good recipes that I know to be in there.  I adore this boy.  He is so much fun, so friendly and so sweet.  I want to have a pocket-sized version of him so that when I am sad, I can take him out and pop him on my computer to entertain me!! 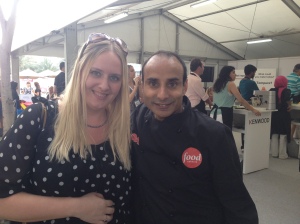 After a chatting with Reza, I went off to find Mum a nice cup of coffee (yes, in +30c heat!) to revive her, and noticed that the star of the pastry world, Chef Eric Lanlard, was signing his books.  Of course, with a book entitled Chocolate, how could I possibly refrain from purchasing?  Also, Eric is known really as the bad boy of pastry with his tossled hair, giant blingy earring and rather sexy French accent – killer combo with the twinkly blue eyes.  Watch out ladies!  So, what girl could resist a book dedicated to chocolate with a naughty French chap thrown in for good measure?! Book in hand, I queued and waited for the meet and greet, and it was worth it!  What a sweet boy!  We had a chat and a photo, and a laugh about our failed food experience with Reza. Piccie time, and a promise to watch his Masterclass over at the Kenwood Chef school later in the day, and then it was time to amble on to the next thing.  What a nice chap though!

Last of the book signings, but certainly not least, was the hugely talented (and rather dishy!) Jean-Christophe Novelli.  Swoon.  Again, such a lovely person.  He happily signed the book, posed for a photo and chatted for a while, and also then introduced himself to my mother/photographer.  Such easy charm, but sincere too.  As an aside, he was there with his two children and his beautiful fiancée.  Those kids are adorable now, but are going to be knock out stunning as adults with a mix of their parents genes!!  Just after he signed our books, he started on his cooking demo, where he made Coq au Vin avec Chocolat (chicken with wine and chocolate – what’s not to love!!!!).  Oh my word… it looked and smelt amazing.  The absolute genius of the dish was that it was fat free (not counting the chicken skin).  Thankfully it was in our new recipe book, and Mum and I are planning to give it a whirl! 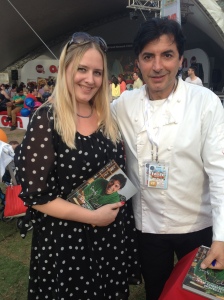 There were two highlights of the day through:

The first was Jenny Morris and Reza Mahammad doing a cooking demo together.  I honestly haven’t laughed so much in a very long time.  They have apparently been friends for about 8yrs now, and it shows.  They just complement each other perfectly.  Their humours bind and bring something even funnier than you were already expecting!  Their cooking is fantastic too!!

I will repeat my Twitter Plea to the Food Network…. please, please, please commission a show for these two together.  It would be absolute compulsive viewing and would bring in the ratings to a level that you just would be bowled over by!  It wasn’t just me that thought it was hilarious… there were so many people there and they were all laughing!  Do it!  Please!!!!!!

The second was following Eric Lanlard’s masterclass.  I couldn’t get a spot to actually participate, but since Mum and I are both keen bakers, we popped along to see what we could learn.  I did learn a new piping technique which was cool, but that wasn’t the highlight.  The highlight was when he gave me his cupcake at the end of the class!  What an utterly adorable thing to do!  He had remembered that I passed comment at the signing about not being able to eat anything after Reza’s class, so gave me his pretty cupcake!  I was absolutely overwhelmed, and didn’t quite know what to say!

Mum and I both agree that it was the ‘icing of the cake’ of a completely awesome day!! 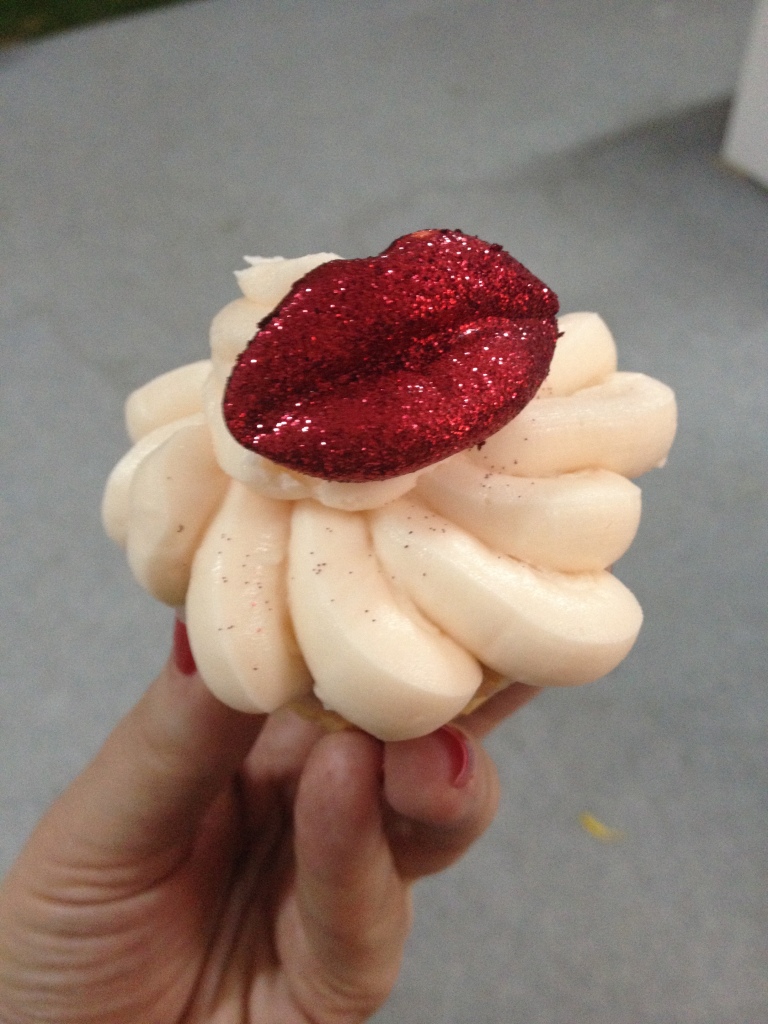