My friend and I saw a voucher on Cobone (like Groupon) for “Unlimited dim sums, international buffet and pool access”. We both love Dim Sum and also a good pool day, so as this was ludicrously cheap compared to our normal haunts, we thought we would give it a bash.

What can I say?

There were two good points to our entire day:

1) A waitress called Mekden. She was a joy. The nicest member of staff in the entire establishment. Literally.

2) Leaving to go to Marina Mall and catch a movie before dinner.

I really wish I was kidding.

Let me explain the day so that if you are thinking of using this Cobone deal, or any in the future, or if you are looking at the hotel to stay in while in Dubai, you can think again.

We arrived and, maybe because we are Expat Brats, we waited for the Valet to come and help us. Or anyone. After 10 mins, I got out and went into reception to inquire as to what we were meant to be doing. Not only was I ignored (even dealing with other guests, a good front of house team will make eye contact and smile at the very least), but when I was finally spoken to, it was in a rude and dismissive way.

In the meantime, my friend had been waved at and shouted at, and eventually someone came over and shouted at her to move. Only when she stood her ground and was unmoved by this very strange method of guest information, was it explained where she could move to.

We find the pool (which in fairness is visible from the main road so not that hard but not exactly private either), and are given towels. We enquire as to where the changing facilities are. They are in the main lobby. Great. No matter, we came wearing our swimmers so we can just strip off.

Enquiries to food and beverages was not met with comprehension. We had bought our own water anyway, so again, no biggie.

Then, we get to the actual pool only to discover that there are about 10 sun loungers for the entire complex, and all of them have been taken by people who were up before us. We locate some chairs and an umbrella, and hit the pool.

The view was very nice, if you know how to crop your photos. My friend is an expert. Pic at bottom of this ramble.

The pool itself was the perfect temperature for me, and deep enough that I could do my physiotherapy exercises and really feel the benefit. There you go… that’s the highlight of that section of the day.

The concerns I have for the pool, aside from the fact it is dirty and there are cracked and missing tiles, is that it says its 145cm. There is no way. It is much deeper. Although it’s not a problem for me, there are safety reasons that pools should have this written correctly. It may only be 10cm deeper (rough guess – I could be/probably am wrong), but that makes a big difference to some.

Then the fun and games started…

An attendant came over and said the pool was shutting at 2pm and we had to leave. No explanation. We explained that we had called and booked, and were told the pool was shutting at 6pm. After repeating that it was going to shut and we had to leave a few more times, he tutted at us and only then explained that there was a function on and they needed to set up for it. He then stomped off. We were not the only people who were objecting to this closure.

Eventually, when they saw the majority of us were not going anywhere, they shuffled us all off into a corner so they could work around us. It was the only corner of the pool that had the sun left by 2.30 anyway, so we didn’t mind too much despite being a bit packed in like sardines.

By 3.15 the light had totally gone and it was a bit chilly in our wet swimwear. It was also a bit awkward having staff stare at you. We had a contingency plan though… we could go off to Marina Mall and watch a movie. We just had to change…

We went to the spa and asked to use their changing rooms. They flapped their hands in the direction of the door so we took it as a positive. We opened doors and found ourselves in treatment rooms, so pushed on and found the only other space was the sauna and steam room.

We decided that this was literally the only place we could change and since they had a shower area, this must be where we should be. I changed in the shower cubicle, and my friend in the toilet cubicle. The shower room was disgusting and filthy. The toilet apparently not much better. Also, there was no wash basin for you to use after going to the loo, so that was delightful. Everything was dirty. Just gross and I am shuddering now just typing this.

Why we felt it was a good plan to go back for dinner, I don’t know. Probably because we like Dim Sum so much and we didn’t think you could go too badly wrong with that.

It was categorically the WORST Dim Sum I have ever had. Literally. Ever. I can’t even describe to you how bad it was because I don’t have the words.

The international buffet was, well, it was there. The only two good things on it was the chicken and sweetcorn soup which my friend tried, and the coleslaw that I had. They even managed to have disgusting hummus. How can you mess up hummus?!

Like I said in the beginning of this post, the waitress was lovely. She really tried. Upon discovering that we hated the dim sum, she had gone off and asked the chef to prepare some sushi for us. Sadly, by this point, we had given up and were walking out feeling not so good. She came after us to tell us, but we just couldn’t face going back.

Oh… I forgot another good point for this hotel: There is a massive Choithrams opposite and I got 10 cans of caffeine free diet coke for AED10. Bargain! 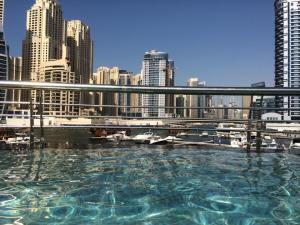