Nope… defo not Ladies Night.  There were no free drinks!

For a nice and relaxed girls’ catch up and gossip night, we decided to try The Scene at Pier 7 in Dubai Marina.  Not the first choice of the night but the right choice!

The Scene is owned by/the brain child of some celeb chef called Simon Rimmer.  He is a UK based chef, and apparently very popular.  It’s things like this that make me realize quite how long I have been out of England.  Even when I googled him, he didn’t look familiar in the least.  But, my friend who suggested it is a fan and that’s what is important!

We got there and were greeted by very friendly front of house staff, and seated immediately.  Very soon thereafter, the waiter appeared.  I want to say right now that he may be one of my favourite waiters in Dubai.  So refreshing to be served by someone with a sense of humour and “cheeky chappy” ways.  Top marks for your staffing Simon.  Please do not change it.

The décor is very gastro pub.  Only half comfortable but thankfully only half trendy too.  There is a lot of wood, which I personally like, and very high ceilings so you get a really good loft vibe.  I think Pier 7 is a great venue.  The whole place fills an entire floor and has stunning marina views.  The one thing I don’t get is the Beano wallpaper heading to the restroom.  I was a bit confused by that!

The menu was very gastro pub too, which is again a refreshing change.  Nothing super fiddly and fancy, but some nice twists or additions to British Pub fare.

I had a burger which was rather nice.  Best in Dubai?  No.  I am at a disadvantage though because I can’t eat the bread roll (wheat intolerant) which as it was a brioche, would have really lifted the whole dish.  I think it needed that little bit of sweet.  Chips were seriously good though!  Proper fat, chunky, borderline wedges.  Yum!

One of the girls had fish and chips which was apparently very good.  It certainly looked it.  Light, crispy looking batter.  If you are looking for something that you would get served overcooked at your local chipper, this is not the dish for you.  It was perfectly balanced.

My other friend had the Welsh Rarebit, with a side of roasted beetroot, spinach and balsamic.  I had to give this a try because I really do not know if I am a beetroot fan.  I still don’t.  I am however a HUGE fan of this dish.  Just wow.  Highly recommend you all get a side of that when you are there.

I don’t do sugar and the girls didn’t fancy a dessert as the portions on the main course had been more than enough, so I have no idea if they were any good or not.  We did see a slice of something gooey and yummy looking being served though and wished we could.

The check came to about AED800 which wasn’t too bad considering that we had slightly too much wine with dinner.

Would I go back?  YES, absolutely.

Would I recommend you go?  YES, absolutely.

Just a shame it was a bitch of a journey back to Old Town.  If I still lived in the Marina, this would be a local. 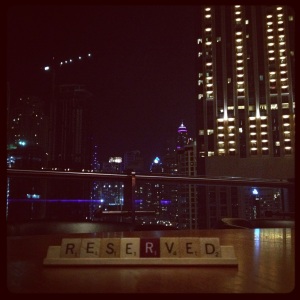