In 2003 I set off to visit South Africa with my best friend, Albert.  I can’t remember how it all came about, but it did and I will forever be thankful to him for allowing me to tag along.  It was all very nerve wracking.  I didn’t speak Afrikaans and we didn’t know how much English the family spoke.  But I needn’t have worried.

We were met at the airport by the family.  It was the first time in years that Albert had been home.  His mother scooped him up in his arms and they both cried with happiness.  His father stood closely by, and with tears in his eyes, joined in the hug.  He knew to leave them for a moment though.  They needed that reconnection.  A mother always does.

I stood awkwardly back.  I didn’t know what was being said, and didn’t want to get in the way of the reunion.  It wasn’t my place.  Then Mr. Van Niekerk stepped forward and gave me the biggest hug, and welcomed me both to South Africa and to the family.

This was typical of this beautiful man.  He had the biggest heart.  As far as he was concerned, if his son liked someone enough to call them his best friend, then I was part of the family without question.  That level of warmth and generosity put any nerves I had to the side.  Especially when Mrs. Van Niekerk greeted me in the same way.  It was a precious moment that I will never forget.

Before long, I had started calling them Mom and Dad.  I loved them intensely.  It was very obvious to see where my wonderful friend had come from.  You couldn’t fail to be one of the best people on the planet when your parents were as loving and kind as his were.

I have called them Mom and Dad ever since.  They are my adopted parents.  My own Mum and Dad never had issue with this, and were just happy that I would be well looked after when I was visiting SA.  Mum and Mom eventually met, which was strange but beautiful.  Neither of the Dads left their own countries.  But I know they are now in heaven together, watching down over us all and catching up on countless shared interests.

I know my Dad will enjoy Dad’s animal stories.  On that first trip to SA we went on a 4 day trip into the Kruger Park.  It was the best introduction to an entirely different world that I could have ever asked for.  Dad knew everything.  He knew the animals names and could tell you so much about them and their behaviours.  He also knew all the folk law of the way animals got their markings, for example.  He had endless patience for me and my camera.  It was one of those old ones that actually needed film… that’s how long ago it was!

The stories didn’t end with sundown.  He entertained us with more over dinner.  He told us how the smoke of a wood braai always follows the prettiest person the in group, then roared with laughter as Albert and I fought to be in the direct line of the smoke to prove who was prettier.  He calmed down this naive and somewhat terrified city girl when she could hear the calls of the animals in the night.

Simply put, he introduced me to his world, and I loved it.

Later in the trip we drove down through the Karoo, towards the south coast.  He drove the whole way.  Never complaining.  Always pointing out things that I needed to see or know.

We stayed overnight in a place called Three Sisters.  Dad explained that it was named after the sword on Orion’s belt.  Then pointed out Orion and his belt, and then the three sisters constellation which made up the sword.  He also pointed out the Southern Cross, a constellation that is only ever visible in the southern hemisphere.  He knew that I was clueless, but never made me feel dumb.  Just kept telling me his stories and pointing things out with endless patience.

At the end of this trip, my heart was very sore to be leaving my new family.  I guess Dad could see this.  He took me for a last walk around the garden, and to the lemon tree which had been of such entertainment to me.  What he said next will never leave me.  He told me that he always thought God would bless him with a daughter, but he had been given three sons who he couldn’t love any more than he did, or be any prouder of.  However, he knew now that God had finally given him the daughter he always knew he would have, and how his family was complete.

My heart is breaking.  The world will never be the same.

I love you Dad.  I miss you already. 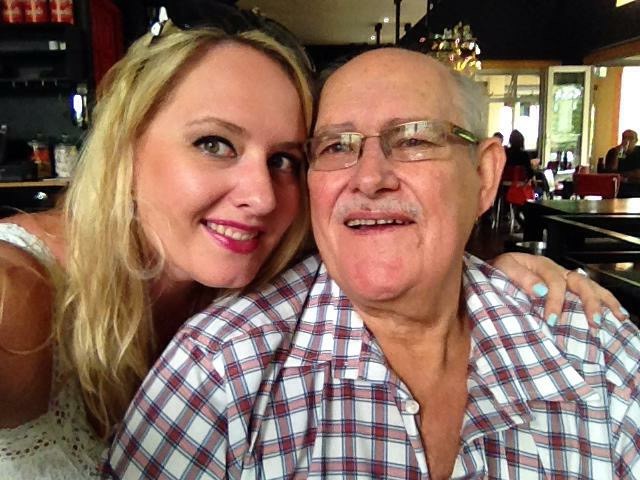