As you may or may not know, I am on holiday in South Africa at the moment.  I am blessed to visit every  year as my best friend is based in Johannesburg.  It’s a visit I look forward to not only to see my darling ‘Albert’, but also for the food and scenery.  Because I have visited so often, and because I have been an expat for nearly 10 years, I have a bunch of very good friends here too.  I’ve either met them through Albert, or they are friends I have met in Bermuda/Dubai, who have repatriated themselves.

I was feeling a little impatient to see them this year, so I decided we needed a good and fun Sunday lunch.  That’s when I remembered The Baron Fourways.  I’ve been every year for the last 4 because the food is so good and it’s fairly close to Albert’s house.

Last year however, we stumbled in on a Sunday afternoon and had such fun!  There was a singer dude down there (whose name I cannot remember) who could not only sing, but had an absolutely terrible sense of humour that had me roaring with laughter!  Naturally, this was the only place I could think of when I wanted to get everyone together… and it really did not disappoint!

We pitched up in drips and drabs, but soon had 12 of us (a bunch didn’t turn up – you know who you are and you know you’re in bother!!!), which was great in itself.  We had drinks, food, shooters, and huge amounts of fun!

Let me tell you a little about the food, since I am a bit obsessed.  Firstly, we all order and then pretty much everyone tries bits of everything… as you do!

I had a fillet steak with a jacket potato.  Sounds dull but seriously I cannot tell you how good the beef is in this country.  It was cooked to perfection, with the knife just melting through it despite not being a steak knife.  It’s high quality restaurant level of good, but at a decent price.  It is just awesome!

Other dishes ordered and sampled included:

As a side note, a couple of the chaps had burgers and the speed at which they were devoured made me summise they were just as good as everything else!!

As for the entertainment… It was just as good this year as it was the same dude!  He hasn’t changed and is just as funny as ever.  However, this year we stayed to the end and saw him in character as a dude called “Frikkie”.  I literally was crying with laughter at his a) accent and b) his interpretation of Achy Breaky Heart.  I wish I had the tech skills necessary to show you.  Honestly, it’s worth a visit just to see him be Frikkie.  Absolutely hilarious!!

This singer dude (seriously, someone must know what he is called??) kept us all singing and dancing in our seats the whole day.  The more drinks were consumed, then naturally the more singing and dancing carried on!  There is also an old guy who goes there every week, apparently, and he just randomly danced around in front of the singer and got everyone up and involved… including me.  What a lovely old chap though.  He was so friendly and fun, and full of life.  I want to be like that when I get old(er)!!!

There was one downside to the day though… and no, the rain wasn’t it!  We just sat there and got wet!

The service throughout the day was spotty.  Whilst everyone was friendly, the wait times to get anything was a bit too lengthy.  Then bits were forgotten.  It was incredibly busy, so maybe they just needed a couple of extra staff?  However, when the place had pretty much emptied out, we still had to wait about 20 mins for a coffee.  I think that was a bit much.

Nonetheless, when the bill came we were more than happy to pay, but not only that, add a good tip for the waiter.  This is the bit that ruined what had been a fantastic day.  The waiter took the money and cards, and when he added it all up, declared that there wasn’t enough tip.  Not only that, he stood and argued with one of our group about it.  Now, I wasn’t in charge of the money, and the waiter wasn’t telling anyone else what was going on, so I don’t know what we left originally.  Either way, it is absolutely disgusting.  A tip is very much expected in South Africa and approx. 10% is the norm.  None of us have issue with that and I am sure we added a little more.  I still, a week on, cannot get over the cheek of this guy.  He is very lucky it wasn’t me dealing with it because a) I would have called over the manager, and b) I would have taken back every cent.  It is a disgrace.

As you can tell, I am still mad!

So, moral of the story… go and eat, drink and be merry but if you get a waiter called Peter either be prepared to tip more than you think is necessary or ask for him to not be your server.

And here are a couple of photos because I like pictures in blog posts!!!

The setting along the Jukskei River, makes this place beautiful!

This is The Baron from the river.  Such a lovely outdoor setting!

Time for the first shooters… 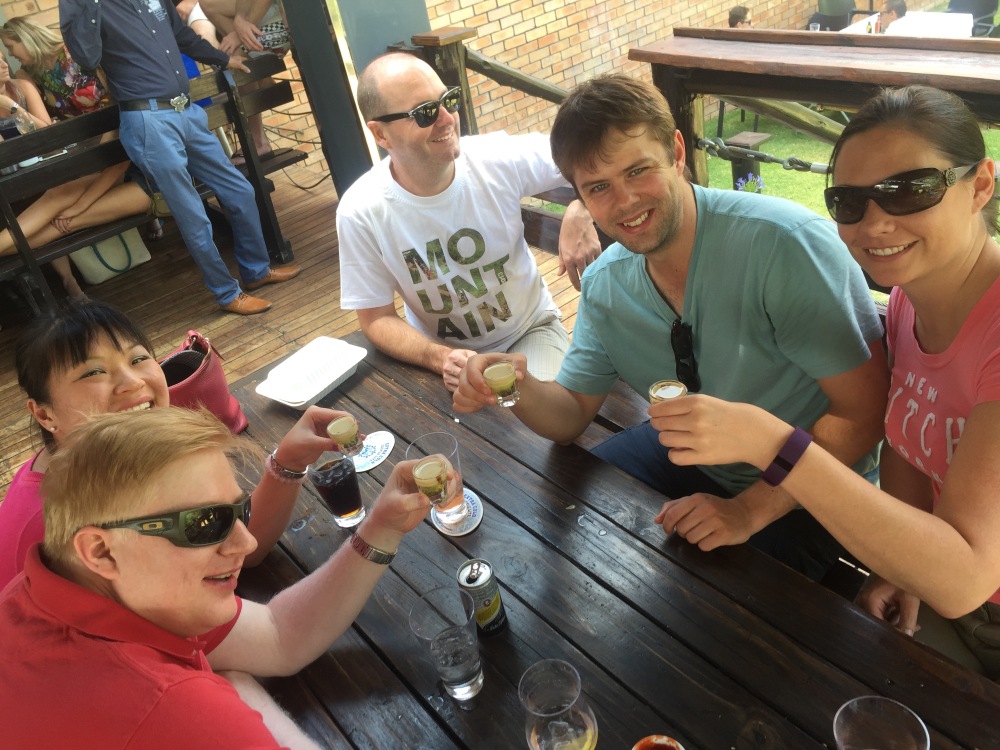 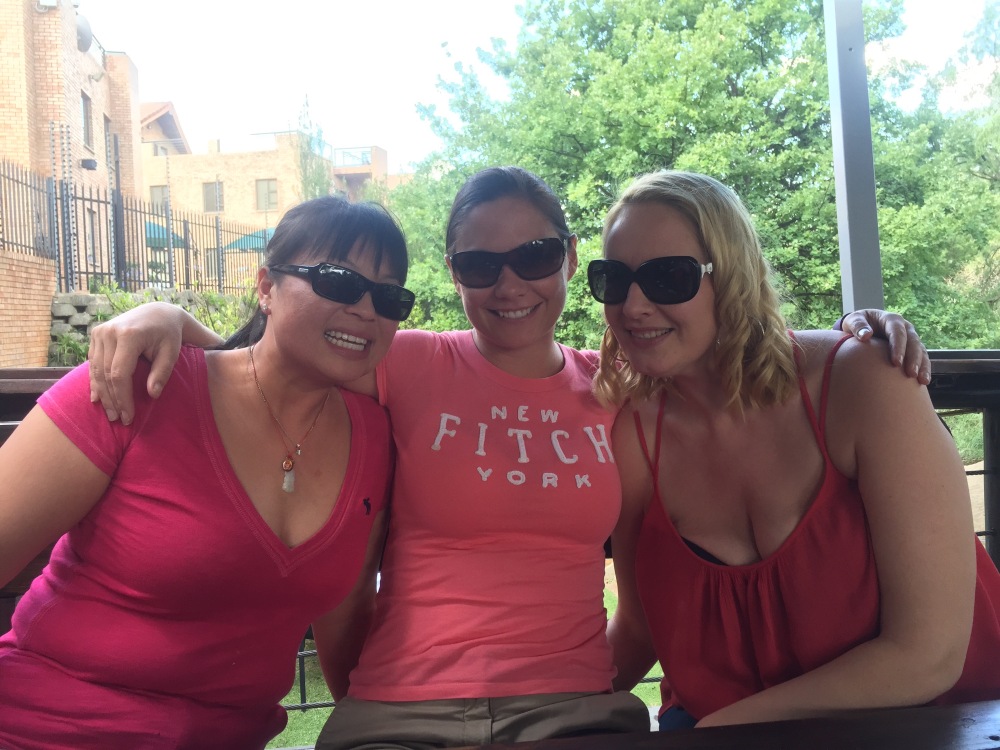 Because we are grown-ups…. 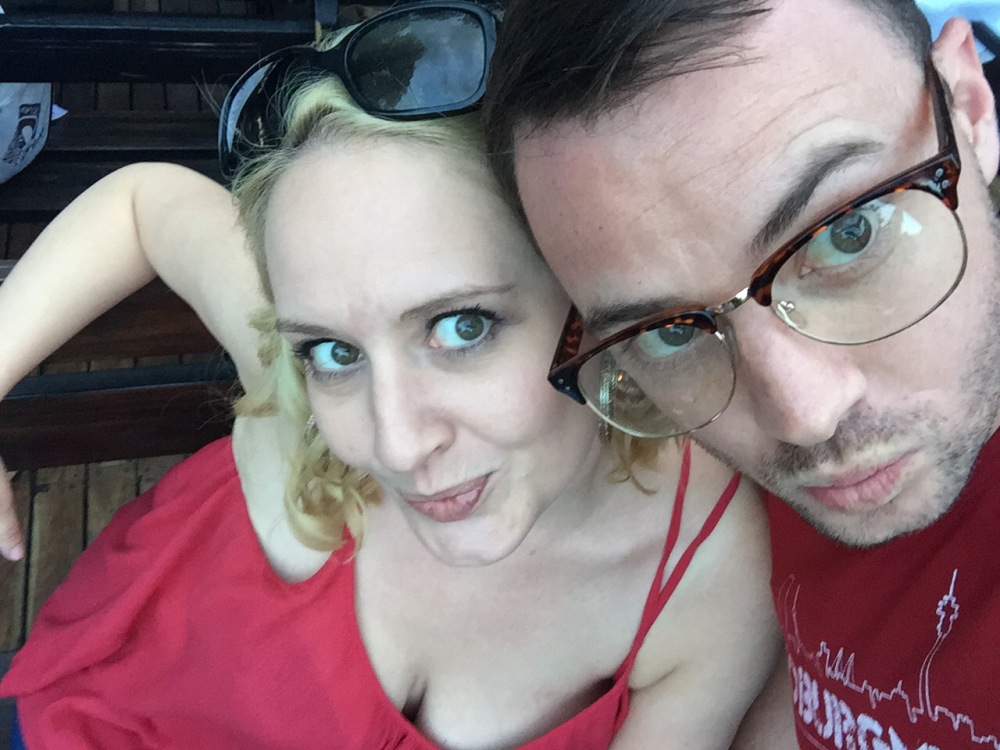 When it rains, then naturally you stay put!!

Even when working out the bill!! 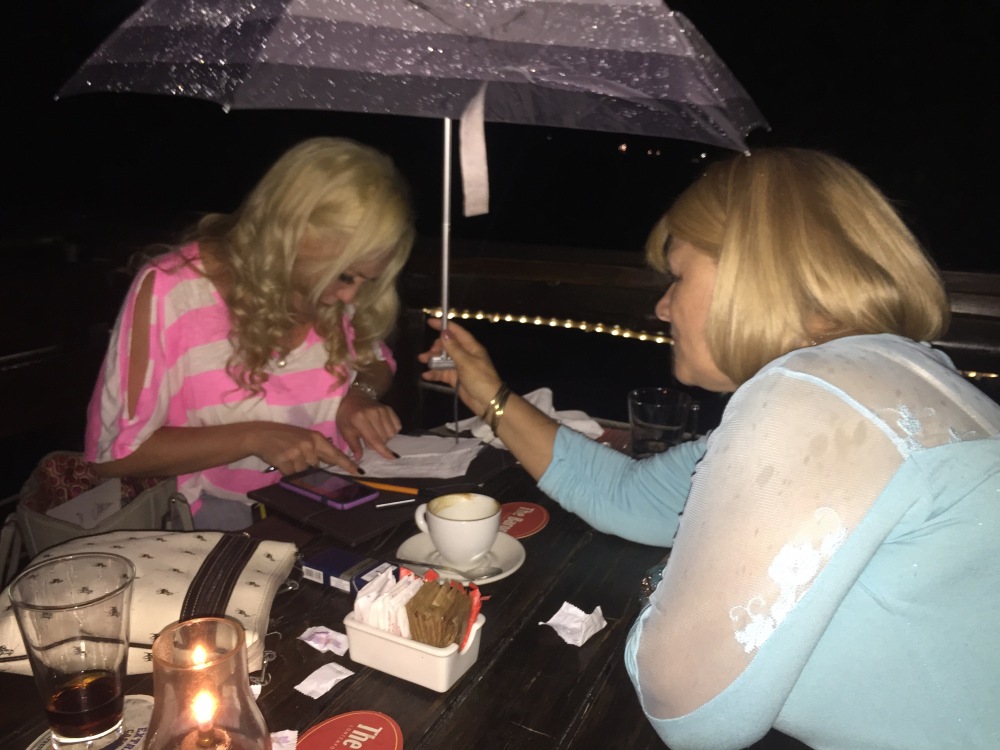