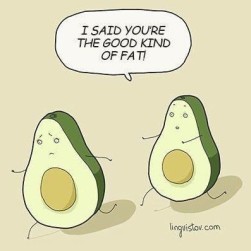 According to Slimming World rules, avocados have syns.  10 syns per 100g to be precise.  It seems like a lot.

The avocado pear is one of the most nutrient packed fruits around.  It has vitamins B, C, E and K for a start.  It also has a bunch of other things that I can’t remember and probably couldn’t pronounce anyway.

The reason Slimming World syn it, one would imagine, is that it is approximately 67% fat.  Good fats and good healthy acids, but fats still the same.  Some of it is saturated fat (approx 14%) but fat is fat none the less.

I think Slimming World syn it heavily to put people off eating large quantities of it.  I mean, if you mash it and add some nice tomatoes and chili, you’ve got the start of a lovely guacamole.  It’s very tasty and technically healthy, but it is high in fats so you probably shouldn’t eat much!

This is where it gets controversial.  Some people syn it, some don’t.  The people that don’t syn it aren’t just the fatties that fail.  Some are target members or people that are well on their way to target. There is always a bit of an interesting discussion when someone admits to it.

I have decided to be one of those people who don’t syn it.  Not because I like to be controversial or to open up one of those endless debates where I want to tell stupid people to shut up, but because I don’t eat that much of it and it is a really good source of friendly fats which will help keep my wrinkles at bay.

I only ever buy one avo at a time because they are notoriously difficult to catch at the perfect ripeness.  Quite often I’ve only just caught it so I have one serving out of it because I can’t eat a whole one at once.  My servings are between a quarter and a half at a time so technically 2.5-5syns.

Whilst it’s not a huge amount of syns, it does still eat into your allowance, and that bothers me.  I would rather spend the 5 syns on an avocado than on a 2 finger Kit Kat or something.  It’s healthier in the long run.  But I don’t want to use syns on something so healthy.

(That is only in part a lie.  I would always chose the Kit Kat first, unless I am trying to make healthier choices and stuff which is super rare!!)

I like a little bit of avo on my salad, or a little with some scrambled egg, but that’s about it.  Well, aside from the aforementioned guacamole that I would demolish with a bag of tortilla chips and totally balls up the dieting efforts!

With all this in mind, I am officially not synning avocado.  Is that wrong?  Which side of this argument do you fall?

P.S.  In my “exhaustive” research into the positive side of avocado (yep, I read Wiki and some random titles of articles that sounded too boring to read), I have discovered that there is a big fat lie surrounding them… Avocado does not mean ‘testicle’ in ancient Aztec (or Nahuatl if you want to be very technical), just as ‘guacamole’ does not mean ‘testicle sauce’.  Avocado translates back to avocado, and guacamole means avocado sauce.  Sorry!