I woke at 5am in a real huff.  I have no clue why.  Perhaps I had been having an enraging dream or something?  It’s highly possible as I am a compulsive dreamer.  Whatever the reason was though, there was no going back to sleep.  I went through Facebook, and Instagram, and caught up on my blog reading.  I even went on Twitter but that really is my least favourite social media app currently.  By 6am I had finished with those and even playing Boggle and Words with Friends against the app.

Don’t you hate it when your day starts like that!?

It did however rapidly get better as I ended up convincing The Boy that it would be a great time to get up and dressed, and head to the fish market that one of my friends had discovered the other day!

It was a perfectly timed discovery and share as I had come to the conclusion the other day that I eat entirely too much red meat.  I don’t process chicken so well after the food poisoning incident, and I loathe lamb. Pork is available here but expensive and only in certain places, and you can’t regularly get turkey.  I know the great answer would be to cook more meat free dishes but yeah, no!

That was a long explanation for I eat too much red meat and wanted to add more fish to my diet!

The only problem I have really is that I don’t know fish.  My mother is very allergic to it, as is my sister, so it’s not really something we had growing up unless it was battered and from the chippy.

Now is the time for me to learn and broaden my culinary adventures though!  Not only is it healthier than eating at least one meal a day that is cow, but also there is this fish market that is super cheap compared to the grocery stores!

(Also, does any one else feel like a healthy grown up when they go to markets and not the grocery store for things?!)

For example, my friend bought 1kg of king prawns, 2 sea bass, 1 red snapper and a 2kg salmon.  You will never believe the cost so I’m not going to make you guess.  It was only AED 220 for it all.  Now, you have to pay a little extra to have it cleaned and prepped for you, and there is also a BBQ and marinating area area where you can get that done too which I assume they charge you for.  But seriously?!  AED 220 for all that beautiful fresh fish is an absolute steal!!

Armed with Google Maps we made our bleary way down to Umm Suqeim 1, which for once took us to exactly where we needed to be!

The fish market is literally on the side of the water.  It’s also thankfully not as “rustic” as I was expecting.  I had visions of having to walk down onto the sand and pick fish from the boats like I had in Mozambique. 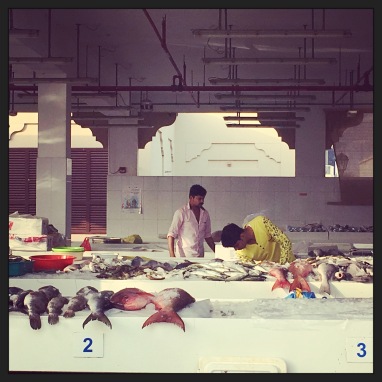 I was however very pleased that it wasn’t an enclosed market like the one in Karama.  You can smell that place as you drive up to it.  It must be terrible inside.  This was a covered area with open walls, and very clean.  Yes, it smelt bad but it didn’t make me gag at any point which is a bonus.

There were flies everywhere though which was a little off putting.  I had a think about it while people were picking up various fish and thrusting them towards me, and decided that they were landing on the bits that would be cut off (scales and shells) so it would be ok.

The ice was fresh, the floors were continually being mopped down, and the people were clean.  I bought fish!!

That is a slight exaggeration.  I bought A fish.  A white snapper.  I’ve not had that before but I know I like red snapper so figure they can’t be dissimilar.  I also bought a kilo of king prawns.

Now, prices: the kilo of prawns were AED 50 and the fish (whole) was AED 80.  I had them de-shell and de-vein the prawns and fillet the fish.  That cost me AED 11 which in fairness, I would have paid five times that because there is no way I would know what to do!  Sadly the BBQ man hadn’t arrived so I couldn’t’ cheat and have things cooked!

Here’s the thing I noticed.  They don’t take your money straight away.  They take you through the back into the outhouse that home the guys who cut everything up for you.  I have decided now, upon reflection, that this is so that you can’t argue too much on the price.  Once it’s all cut up and dealt with you can hardly walk away if you don’t like the price.  Well, you could but you would have to be one major asshole.

That said, the fish was filleted and the pieces are literally the length and width of my forearm, and a good 1cm thick at least.  Talking to my coworkers we have agreed that you would pay more than AED 80 for just one of those fillets, so it was a fantastic price.  I do think that I could have haggled them down a little though.  I was just overwhelmed by the whole experience.

I had taken a cool bag and some ice blocks with me, and when I got home I immediately transferred them out of the carrier bags they had given me, and into some nice freezer type bags… then washed my hands a million times!  I am terrified of cross contamination!

The next task was the most daunting though.  I had to google recipes as I have absolutely no clue what I am doing!  I figured the prawns needed chilli and garlic, and maybe some lemon juice because I had seen that done before, but I haven’t got the first clue about how much to put in.  Then, there was the snapper.  I wouldn’t even know where to start.

Google, google, google and google some more and eventually I came up with… basically nothing.  So many ingredients, and since when have oil or butter been so heavily used?!  I know it tastes good but really?!

I eventually took the advice of a Portuguese friend for my prawns and kept it simple with garlic, chilli flakes and lemon juice.  I had been leaning that way before as I said, but it’s always nice to have a referral.

For the snapper I decided that it needed to be Asian.  I don’t know why but that’s where I ended up.  Two of my Asian friends suggested a ginger/soy type base, so I started there and worked up.

Here are the results:

The prawns were delicious!  There was every chance that they wouldn’t have made it as far as dinner because they were so yummy to pick up and munch!  They did though and I am very happy to report that I even have some left over for lunch!  Whoop!

To marinate them, I used fresh garlic and chili.  I also used the juice of two lemons which was too much.  Well, maybe it wouldn’t have been if I had used more of the garlic and the chilli?  I don’t know.  I am going to find out next time I buy them though because they were really very good and I want more already!

The snapper was ok.  Because we had so much and I was really unsure what I was doing, I actually made two dishes.

Dish 1 (the brown one) was my Asian attempt.  I had listened to my friends but also googled and added things.  It would have been a mind blowing marinade on a giant lump of steak, but it was too over powering for fish.  I also put in too much ginger.  I am not a huge fan.  It needs to blend in and not stand out.  I will try this one again but with less flavour.  I also left the fish in the sauce for a good half hour, and poured it all in when it was cooking.  Next time I will literally brush one side and let the flavours work that way.

Dish 2 (the red one) was a tried and tested one so cheated a little.  I cooked the fish super plain.  Not even salt and pepper.  Then for the topping I made a red pepper and chorizo sauce.  It was literally fresh tomatoes chopped and cooked with some garlic, chilli and red onion, as well as the red pepper and chorizo of course!  This was a hit, but then again it was last time when I made it to put over cod.  It works well with other meats too!  It just is one of those good sauces!!!  I will make this again because it’s a guaranteed good one.  I do want to move away from what I know though to test myself.

As a conclusion, I am really looking forward to going back again on Saturday with the girls.  This time I am hoping that the marinade and BBQ place is open so I can get more ideas and/or cheat and get them to season everything and cook stuff for lunch that day!  I also plan to pay for the fish before being whisked away to the chopping up area so that I know what price I am paying and can try and haggle them down a little.

The one complaint I have about the fish is that they hadn’t removed all the bones.  I don’t like having to pick through my dinner for safety reasons.  I do however think this may have been down to my instructions.  I never asked for it to be de-boned.  Just filleted.  Perhaps you have to expressly say no bones?  I will let you know next week!

For now, I will continue to google.  I will work out what kind of fish they had at the market today and see what to do with them so that I am more prepared next time.  I also will continue to try to persuade The Boy to buy a BBQ because I think a lot of the things that I am finding will taste amazing cooked on the grill and not in the oven!!

If you have any particularly good recipes or suggestions though, please let me know.  I would be very appreciative of your tried and tested ideas!!