Winter in Dubai is glorious! We spend months cooped up in the summer when the temperature is so hot your internal organs are at risk of melting. It cools off in the autumn but not by a huge amount. It also gets humid which just makes it hot and sticky. Then, around the end of November to early December the weather breaks and it’s just nice.

Today was one of those just nice days. No higher than the mid 20’s, clear sky and a light breeze ruffling your hair. Divine!

Since Mum spent most of the day stuck on a plane yesterday, winging her way over to the warmer climes of Dubai, we thought a nice walk somewhere would be lovely. Problem is that a) all the malls are packed with last minute shoppers, b) Mum has been here 100 times before, and c) I live in such a little Downtown bubble that I have no idea where to go!

We eventually decided, after a lovely lazy morning, to head on over to Kite Beach so we could see the sea and feel the sand under our toes if we wanted. We didn’t, but had a lovely long walk along the running track which stretches for miles.

(We may have sat and just judged the joggers quite a lot too, but I cannot confirm this!)

We arrived at a random point and just sat for a while with a coffee (water for me!) watching the world go by, and enjoying that blissful feeling of the sun kissing your skin for the first time in quite an age.

The beach is really quite a long stretch of shoreline so you can have your pick of places to stop and set up. We actually preferred our starting point to the rest of the area because it was so peaceful. There wasn’t so many people and the ones that were there really quite contained within their little groups. 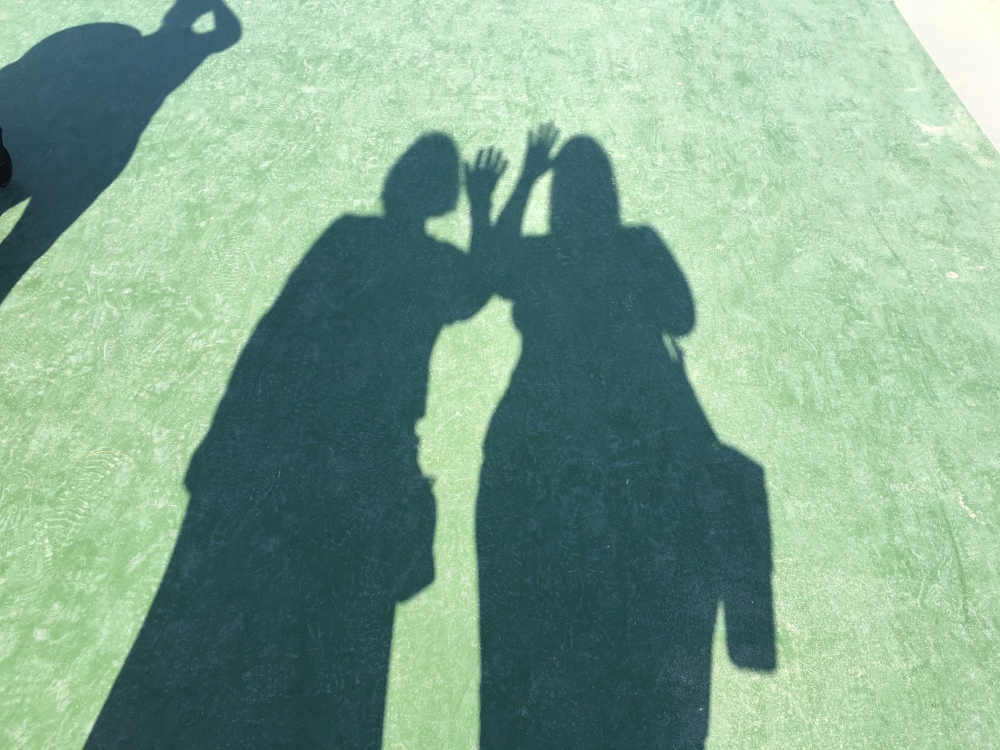 In fairness, there was a lot of little stops along the way. It’s really well set up with little shaded picnic type seats. Not a huge amount but just enough that you can amble along for a while and then sit and watch the world go by again.

Suddenly though, it all changes and you start to get more people, music and concession stands! 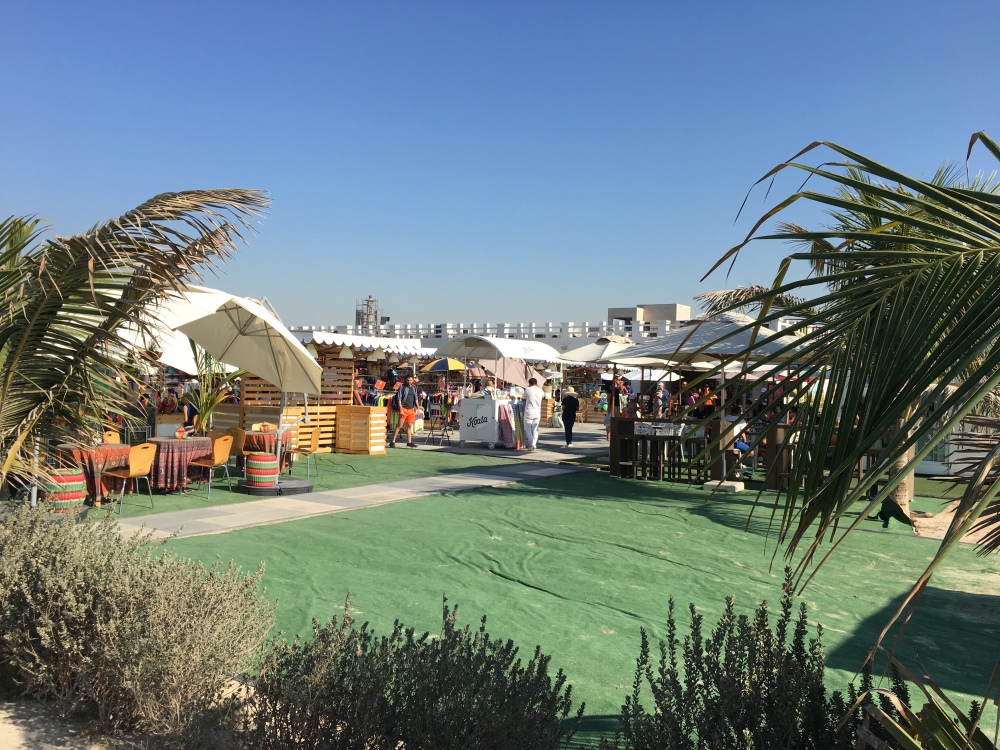 There are some truly adorable looking little places, and then also food trucks! 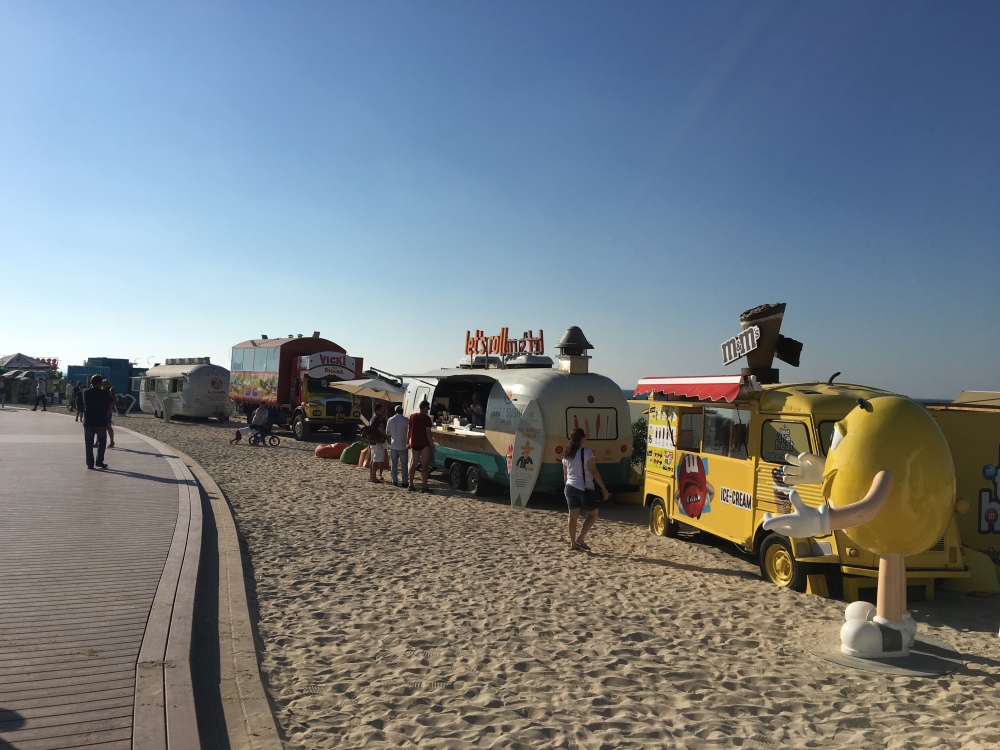 It’s a really great place for a family to visit. There is a jungle gym where you pay to climb a very complex looking set up thingie, by also children’s play areas where they can just run about. It’s all so clean too. 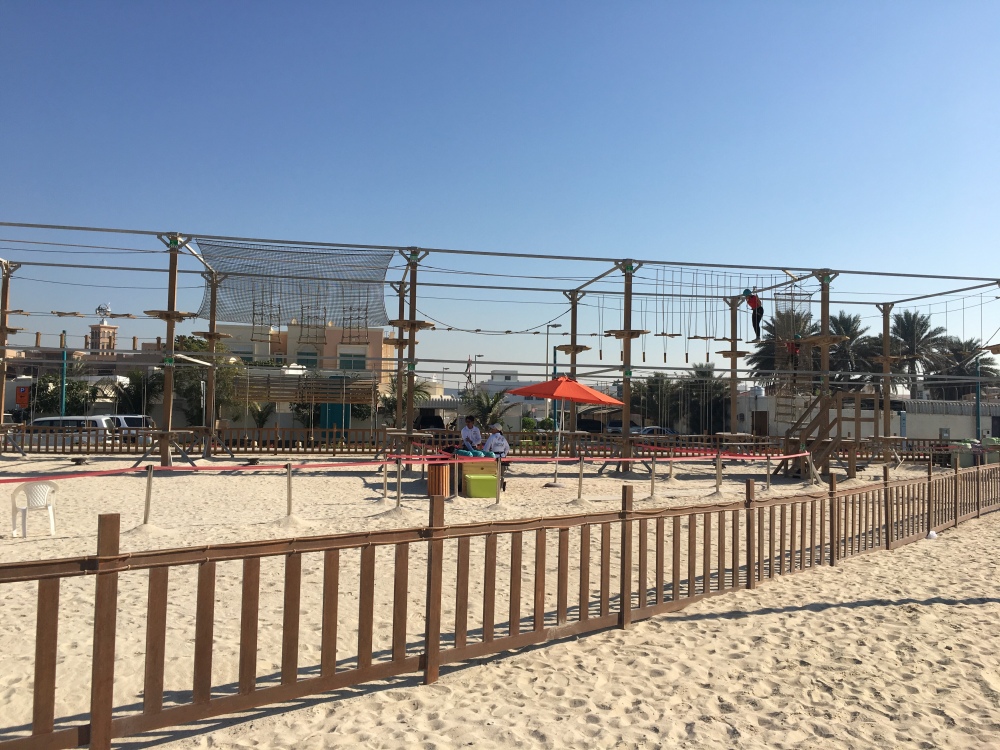 The public bathrooms are even fairly clean. The poor attendant just couldn’t keep up with the sheer volume of people today though I don’t think. Also, some people I’ve decided have never actually seen a toilet before so just aim in the general direction. Revolting.

Back to nice things…

If you’re a sporty type you can hire giant kite things and do beach kite stuff. No idea what but it’s all there and when you get them in your photo, they look pretty, even if it is just a rule board!!

After a couple of hours shuffling along and sitting, we decided we needed refuelling. There is quite a wide choice of places to eat, but we ended up at the last place we came across, and really enjoyed it! 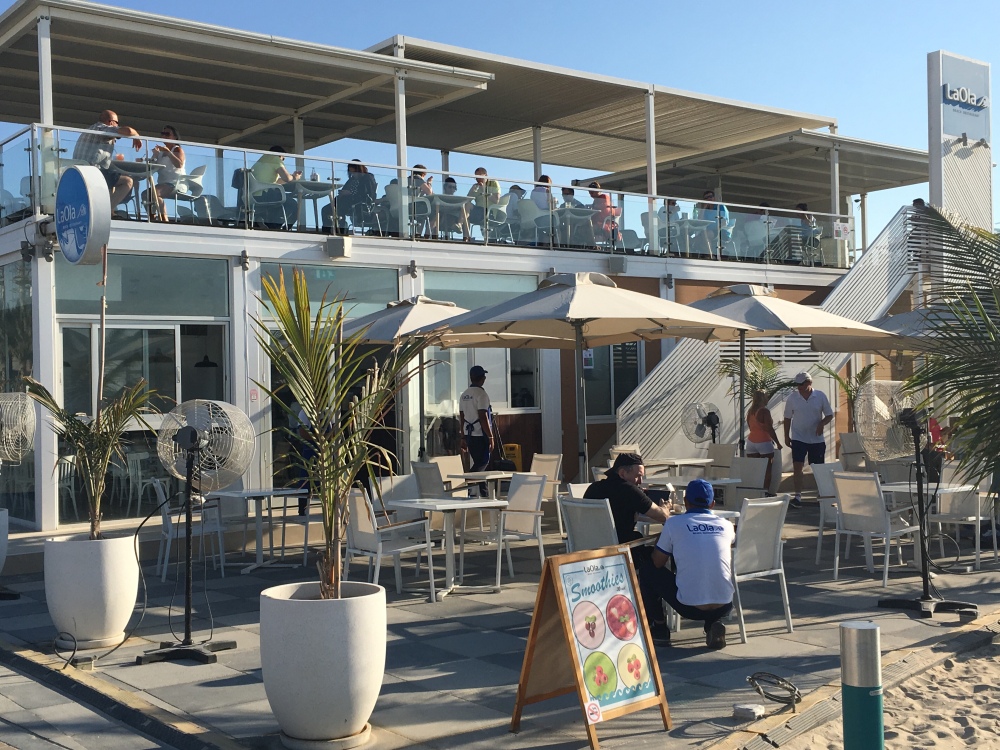 La Ola is a little restaurant rather than a concession stand, and actually sits on 2 floors. We didn’t venture to the upstairs, although I am sure that the view would have been nice, instead choosing a seat where we could watch people go by. Surprising choice, not!!

I’m pretty sure that people must think we are so boring by not talking, but there is always so much to see that you just have to give up and communicate by pointing things out instead!

The menu at La Ola is bigger than I expected and really very varied. One thing Mum and I do enjoy though is Cesar salads! I am pretty sure that it is our main lunch order menu, and it’s especially nice to share with a side of fries! 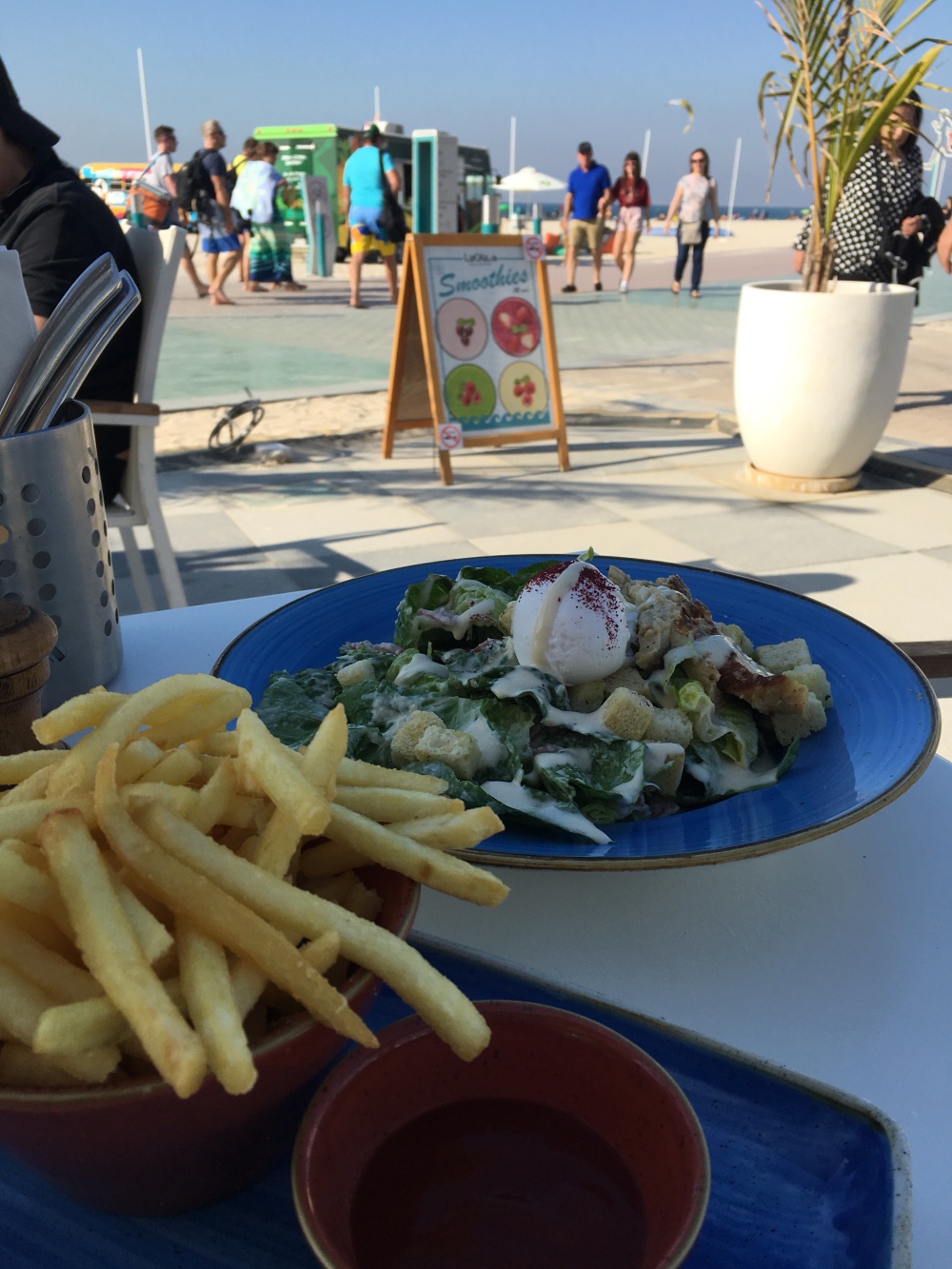 This was a very nice one for where we were. High quality, no, but enjoyable. Although the chicken was obviously dragged out of retirement before being sacrificed. It was tough as boots. I never bother with that bit anyway!

The chips were absolute perfection!!

I would definitely come back to this little gem. The staff were lovely. No one rushed us. We had people to watch. And it was shaded so we didn’t melt!!

It was however time to resume our shuffle along the walkway because there was a little bit more to see still!

I don’t know if these are working boats still or it’s a bit of an installation so people can be reminded that there is a rich history of fishing in the area, but these wooden dhows are pretty to look at!

As you can see, just past the dhows is a mosque.

Mum loves call to prayer. Her face lights up every time she hears it. As it was a Friday she had a nice loud reminder and then as we reached the mosque, it was just time for the sermon. She may not understand what they are saying but loves that it’s done so openly.

Sadly we were reaching the end of our little beach explore. It did mean we could take a couple of photos of the whole beach from one end, and really, that is something to see on its own.

It depends what day it is on how many kites you get while you look along, but there were two today and that was just enough to make things interesting I think!

One last little treat was this brilliant beach library! I’ve never seen one before. what a fabulous concept! It even looks like people use it properly and return books!

Little things like this make Dubai what it is for me. I don’t know how many other places in the world would be able to have something like this.

So that was our little trip to the beach. Not time to put our feet in the water yet, but it’s the start of three weeks of relaxation and there is plenty of time still! 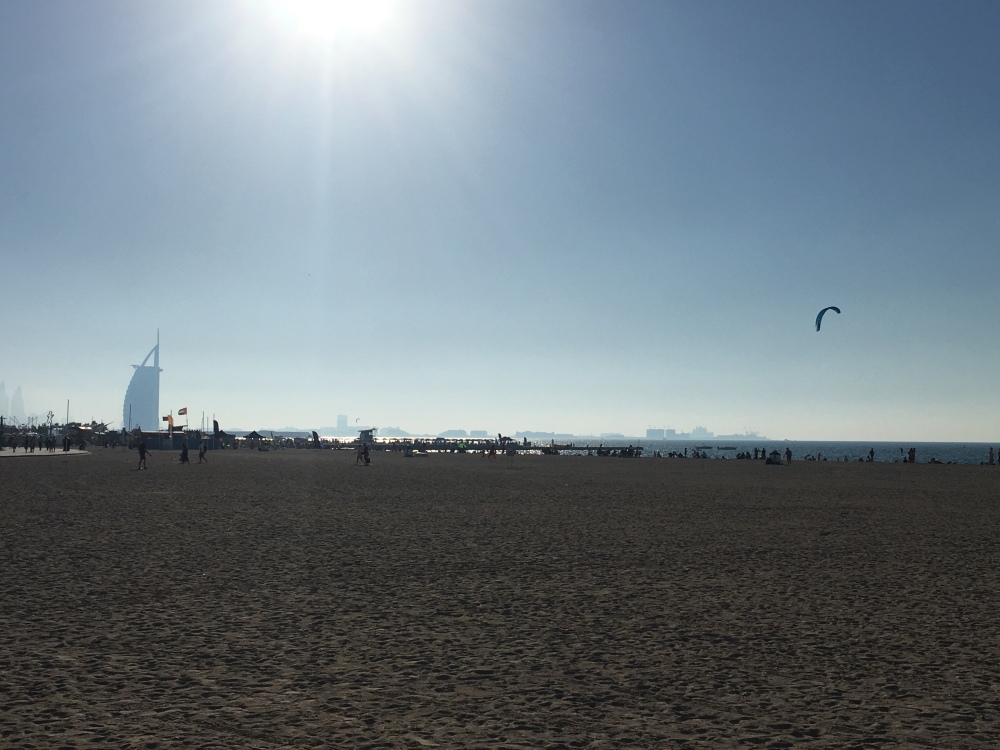