Very early one morning last week, I got a text from one of my coworkers asking if I have ever been to the Dubai World Cup.  I figure it was just a “do you think I should go” type question so said that I hadn’t been because it was expensive if you aren’t into horse racing, and didn’t think about it again.

A few hours later the same coworker comes by my desk with 4 tickets that he had been given to him at an event the night before.  Turns out he is less into horse racing than I am.  It was such a kind thing to do. 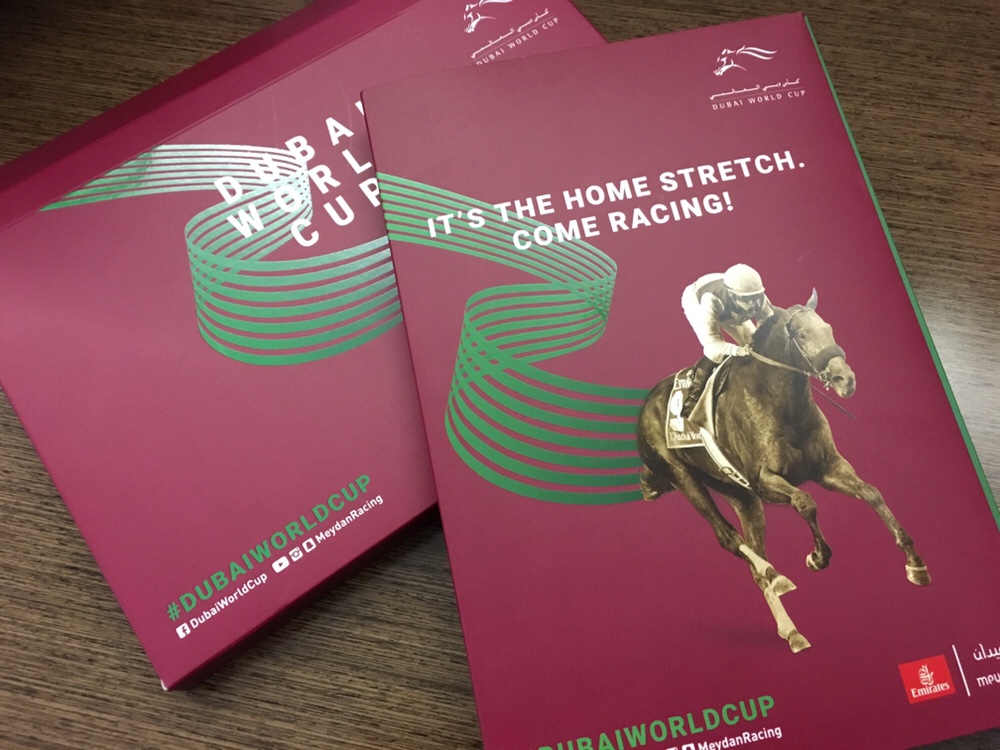 A message was pinged to my girl group and the first ones with their hands up got a free ticket too.  The only thing to do was to work out what on earth to wear.  Thankfully with the aid of some good and strong Spanks, I was able to fit into my Christmas Day dress again.  Luckily, I also had a fascinator to match.  I was good to go! 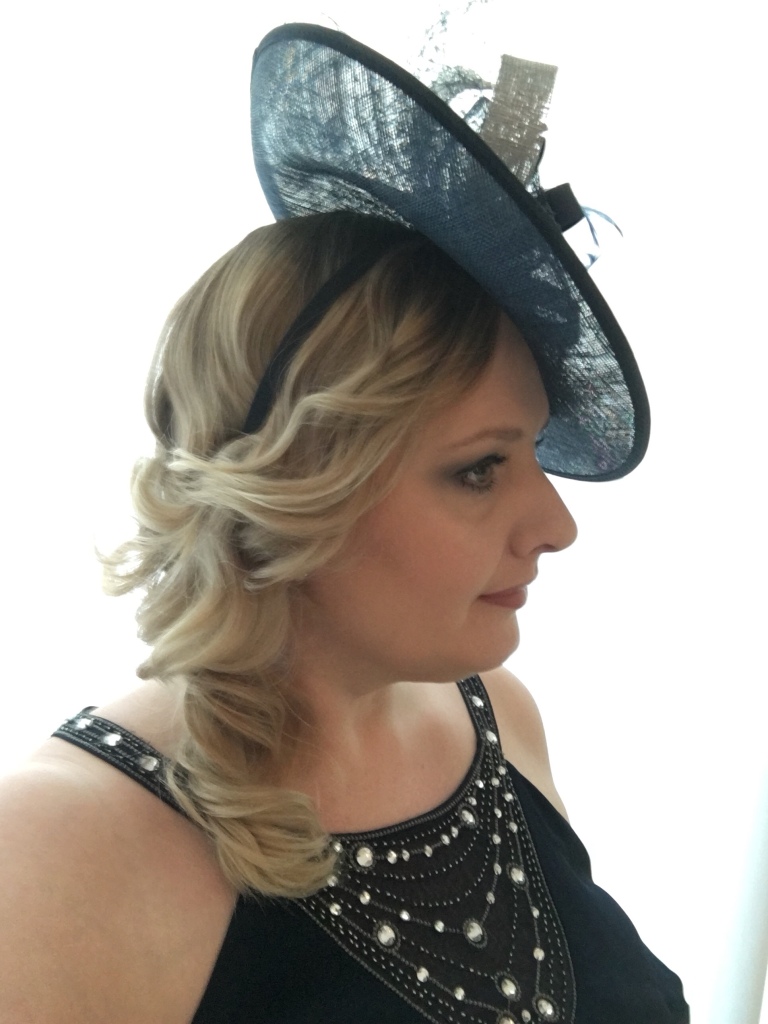 With temperatures set to reach 38 celsius during the day, we took the much nicer option of not arriving until about 6pm.  It was a little later than originally planned, but as it turned out, that was a really good thing as it was still really very hot.  We also totally lucked out… we walked straight into the Moet area, were served straight away, and then the lovely man who was looking after us, found us a nice table to sit at. 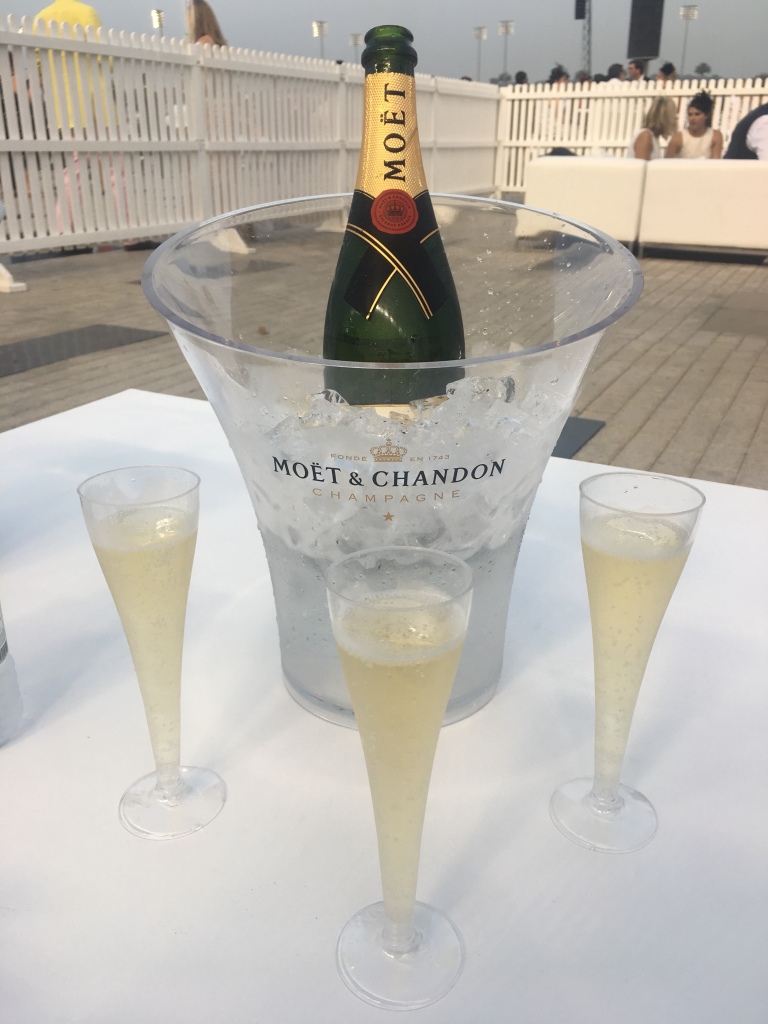 The area was a great place to view the races too.  You could see most of the track and the big screens which were showing the race – and as a bonus they had an animation at the bottom of the screen so that you could see the jockeys jersey numbers keep moving along showing you the order of the pack!  Really clever idea! 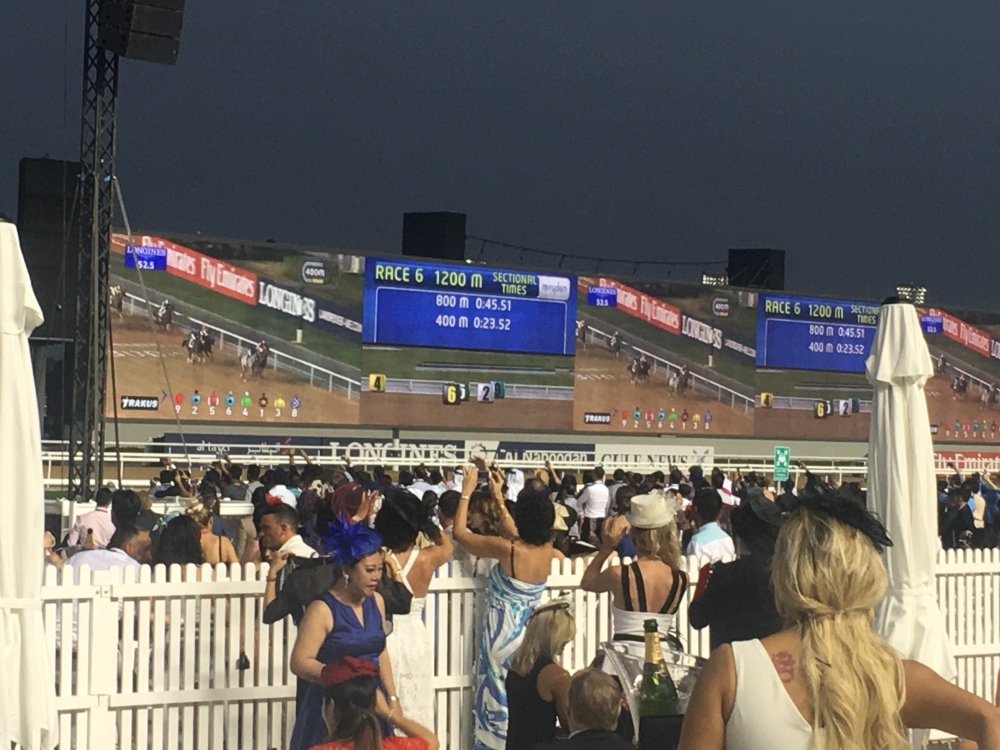 We had intended on having more of a mooch around really but when you find a great spot to start with, where you can see everything you want to, then why move?!

On the tables were menus (AED 200 for an individual bottle of Moet, and AED 550 for a large bottle and nearly AED 2,000 for a magnum!), and a race guide.  We had a lovely little time picking out the horses for each race, and then cheering them on as they went by.  It was a great way of being involved and not breaking any laws.  Betting is strictly haram.  I am pleased to announce though that I had the winning horse in 2 of the 4 races that we saw!!

Speaking of the cheering, it was odd…. it kind of went in a Mexican wave.  No one was really paying attention except for the few seconds that it took for the horse to gallop by.  It was a bit sad really.  There was really no atmosphere in “Apron Views” outside that brief moment.  By all accounts that was not the case in the Barasti area, but apparently it was “messy” so we avoided that!  I remember the great atmosphere at Ascot and at Epsom and although its been years, I am sure that there was between race entertainment of sorts, or music.  Just something to keep everyone’s spirits up.  It was a little flat at Meydan and that’s a real shame.  It could also be because the place is monstrously huge!!

One bit that wasn’t flat though was the strange show that went on.  I have no clue what it was about, and couldn’t see the main act because it was too far down the track, but I was somewhat mesmerized by the music (if anyone knows what it was, please update me!!) and the balloon acrobats.  It didn’t matter what it was for, I could watch these performers for hours! 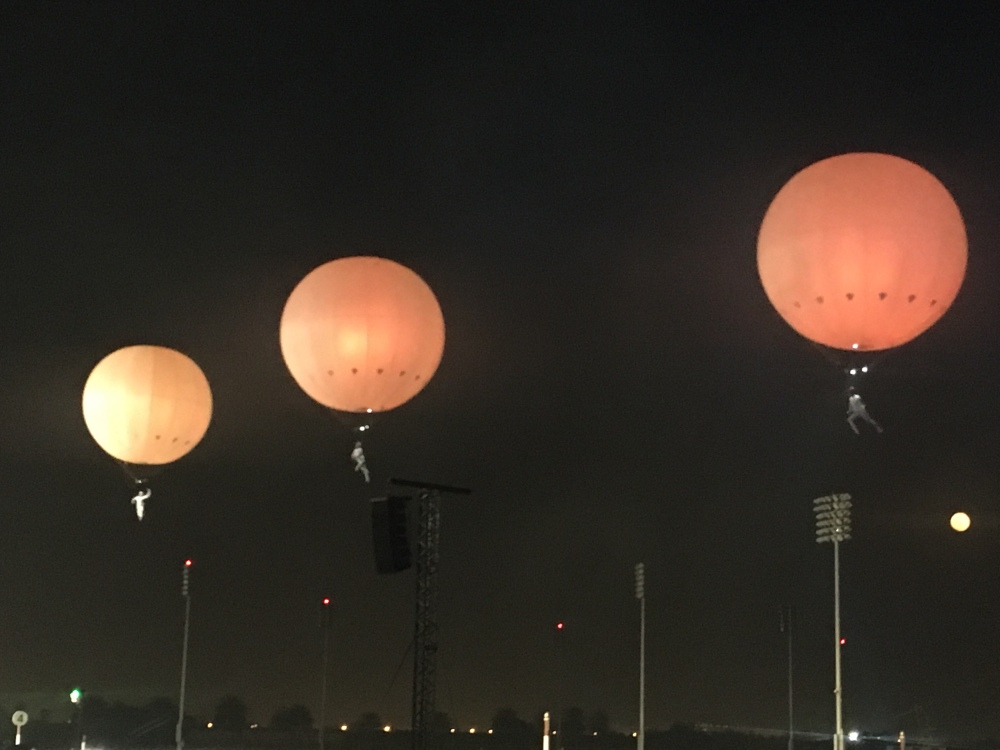 The highlight for me was really the people watching!!  Literally everyone was represented there, from the family who were obviously tourists who hadn’t planned on attending the richest horse race in the world so were dressed in denim shorts, t-shirts and sneakers, to the ladies who spent more than my annual salary on their outfit for the day.

There was only one celebrity sighting for us. Some teeny tiny little chap called Connor Maynard? Yeah, I have no clue either and that’s after googling him. He caused a bit of a stir for a few seconds and then disappeared again. Not hard when you make the jockeys look like giants!

(And no, I still haven’t seen Sheikh Mohammed in real life. 7.5yrs and counting! I am not leaving until I do!!)

Naturally, for better or worse, there were a few stand out moments for outfits though….

My prize for footwear goes to this lady: 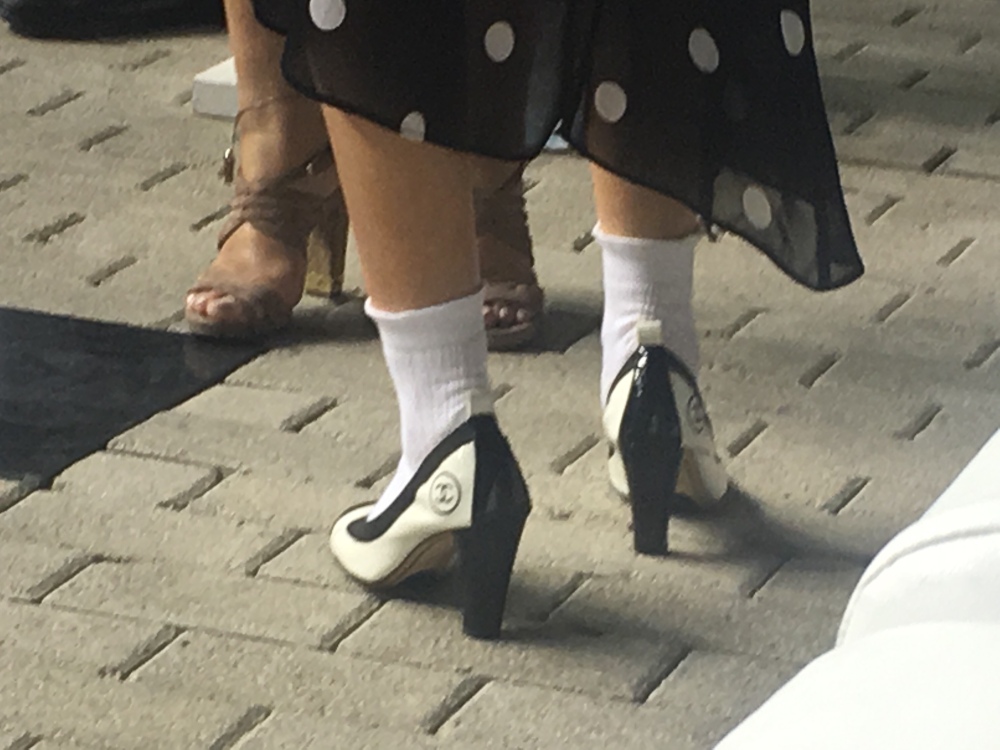 And my prize for head-wear strangeness goes to this lady (photo from TimeOut): 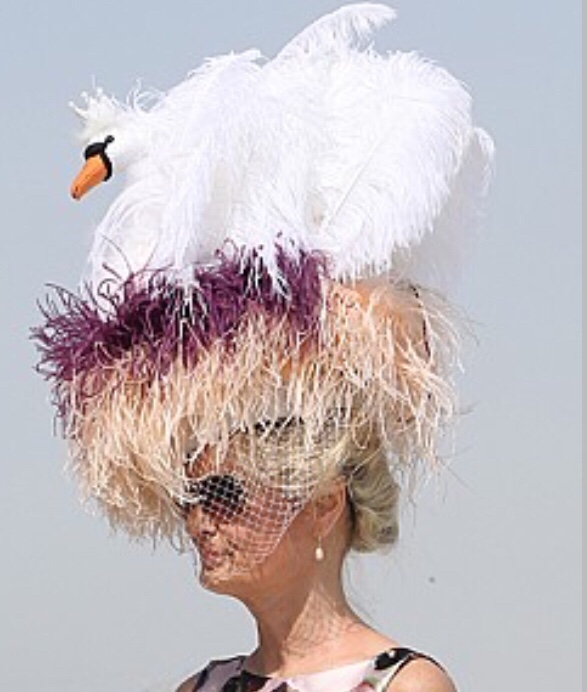 Speaking of TimeOut, they really aren’t great at catching how diverse the crowd is.  It really isn’t as “white” as you would think looking at their photos.  It’s probably fairly Brit heavy, but that doesn’t mean it’s somewhere where people of colour would feel uncomfortable.  Not only that, I saw some of the most beautiful abayas and saris that I have ever seen.  It no doubt shows that the Brits tend to be more camera hungry and that maybe the other ladies have a little more decorum, but I feel it’s quite important that people know that people from all places get dressed in their finery to come out and play!

One other thing… yes, there were a few drunk people ambling about but it wasn’t as bad as I had been lead to believe.  Most people were having a jolly time without getting wasted.  It’s the one thing I had been dreading about being later to arrive.  But, maybe because we picked the Moet area and not Barasti, I didn’t have overall the experience that everyone staggering about.  Just the odd one.

There were soooooo many people that I wish I could have taken photos of but bearing in mind that the UAE has some very strict laws on photographing people and using those photos on social media without their consent, I decided to err on the side of caution and not take pictures.  I do have to describe a couple though, mostly because I was a little shocked….

I really don’t understand how these women, and a great deal more both on the day and generally when “dressed up”, could wear those things with confidence in the UAE?  I was worried because my shoulders were uncovered.  Their bits were all out for the world to see!  And let’s not even mention the amount of women who can’t sit properly in a short skirt.  It’s really quite revolting ladies.  Put it away!!!

My other entertainer of the day was the Social Media Starlet. She was very pretty and totally knew it! Her dress may have been spray painted on it covered her boobs, shoulders and came just above her knees. She looked really nice, if not a little like she could do with a good home cooked meal. The thing that amused us the most was the amount of time she spent taking selfies! It was unbelievable! Also, how fluidly she moved between poses. Amazing! I don’t have a clue how people do it but it’s a skill for sure. Obviously a well practiced one but a skill nonetheless! She was accompanied by Floppy Hair Dude (a Hugh Grant type) and Bow Tie Man. Bow Tie Man obviously had a thumping giant crush on her and those two being a couple would aesthetically have made more sense. She was however with Floppy Hair. From what we could figure out, he has the money too. This made total sense. Social Media Starlet and Bow Tie Man would attract people for more social media photos, and Floppy Hair Dude would just keep going back and buying more champers to keep them all going. Surprisingly, I wasn’t asked to have my photo taken with her! Haha!

There was one thing the shocked me, and probably was highlighted because of all the people Social Media Starlet kept dragging closer, was the amount of drunk Emirates Crew tottering around exclaiming loudly how they didn’t know how they would manage their flight the next day or similar.  It was a bit of an embarrassment for one of the worlds leading airlines, especially as the event’s main sponsors.  But when they employ a large amount of girls based solely on their looks…

Anyway, back to the day!  It really was a multi-layered experience!  It is absolutely something I am happy that I have now done, but it’s also something that I wouldn’t queue up to do again.  Unless there were more free tickets and I had a new outfit waiting for a showing!!

Like all events in the UAE though, leaving was a nightmare.  The girls had work or family arriving very early the next day so we decided that we would leave after the last race.  Also, if you have lived in Dubai for as long as we have, you get a bit jaded towards fireworks.  Once you’ve seen one spectacular display, you’ve pretty much seen them all.

We headed out the nearest exit and joined the fairly quick moving but very long queue.  Everything was going fairly well until we got to the half way point.  Suddenly there were no taxis.  A few more dripped by and were taken by people who had not been queuing which upset the crowd.

After about 15 mins of no taxis, a little chap came running along shouting that there were no taxis anymore and that there were busses.  No explanation and when it came down to it, no crowd control.  Suddenly people started pushing forwards to get to the front of the line.  They needent have bothered though.  For some reason the men who were in charge of the taxi line were opening the barriers at the back of the queue to let people out.

After a couple of sets went by (they were different busses for different areas) we got the hump at being stuck and climed over the barriers ourselves.  Not my most lady-like moment, but it worked.  We were on the bus and heading for Dubai Mall.  What we didn’t know at the time is that our glee would be short lived.

After nearly 40 minutes with a driver who pumped the gas rather than kept a steady speed, we finally arrived Downtown.  It’s not like it took so long because he was going at a snails pace.  Not at all.  The man thought he was audtioning for the next Grand Prix, I’m quite sure.  We were just taken on the most random and long route I could think of.  Actually, that’s a lie.  I wouldn’t have been able to think of it.  I had no idea where we were most of the time.

It was an absolute shambles, but again, it happens every time there is an event and at least there were busses this time.  I’ve waited nearly 3hrs for a taxi before at other out of the way venues, and let’s not even touch on the problems people had after the Guns’n’Roses concert the Autism Rocks Arena!

So, to recap, I had a great time because there was my friends, bubbles and people watching, but I have done that now and that’s enough for me! I am very thankful to my coworker for his generosity though, and am grateful for this very unique experience. 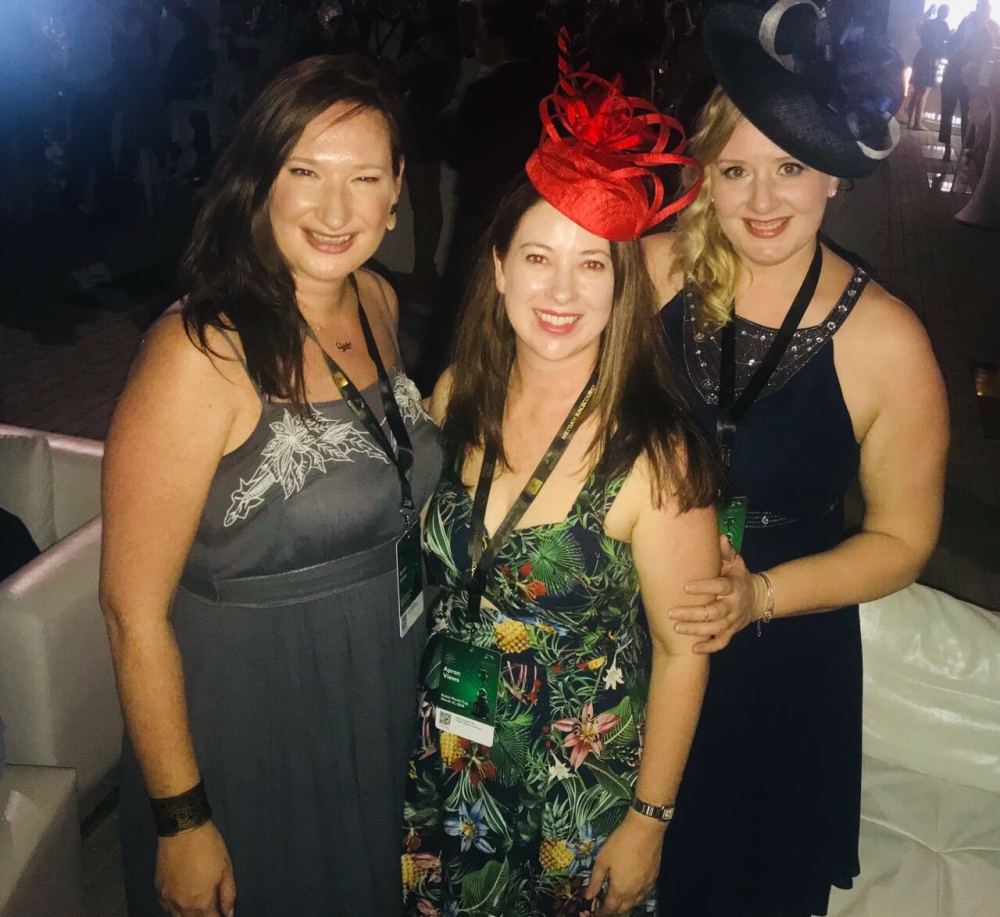 P.S. There may have also been a dirty burger to soak up the bubbles…. 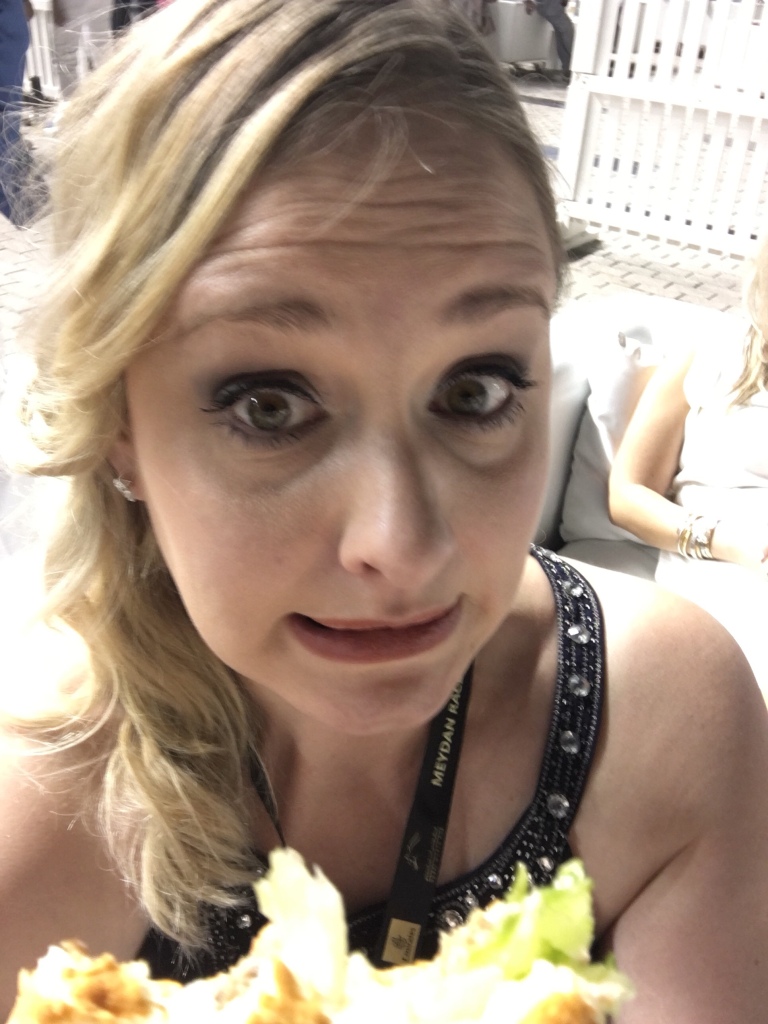